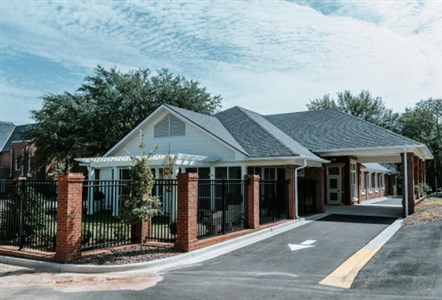 On the corner of North Jackson Street and Flint Avenue in Albany stands a ray of light in a sometimes dark and lonely world for those who feel lost or isolated because of dementia and Alzheimer’s disease.

“The outreach program is such a godsend for caregivers,” said Susan Greene, Hogg’s lifelong friend and guardian. “I feel like the ministry that the Alzheimer’s Outreach Center serves is peace of mind.”

Hogg was also a regular participant at the center for many years before her Alzheimer’s progressed to the point where she needed to move into a facility.

“She loved it,” Greene said of Hogg’s time at the Alzheimer’s Outreach Center. “I had a peace knowing she was happy there.”

Open 9:30 a.m. until 3 p.m. Monday through Friday, the Outreach Center offers caregivers a break from the oft-consuming pressures of caring for those with dementia and Alzheimer’s, said director Nancy Goode.

“It’s so important for caregivers to get a break,” she said. “They can’t always be Wonder Woman or Superman. Sometimes they don’t realize how stressed out they are and how much they haven’t taken care of their own health.”

While at the Outreach Center, participants sing, exercise, play games, and eat lunch. The activities engage their brains and bodies, Goode said. The program costs participants $5 per day, but if they aren’t able to pay, they aren’t turned away.

Although the new building was completed and ready in July, the Alzheimer’s Outreach Center was closed until January 19 due to the number of positive COVID-19 cases in the community. Now open, safety procedures are in place, with screenings, cleanings, and social distancing measures being followed.

While the building itself is new, the ministry has existed for nearly 33 years. Begun in 1988, the Outreach Center’s original building was damaged in 2017 by Hurricane Michael. The ministry moved into two rooms at Albany First UMC, but needed its own space.

That’s when Greene stepped in and – as Hogg’s guardian and conservator – directed money toward the building of the new center.

“I saw the need for the building to be back and the program to continue,” she said. “There are so many people who need this.”

Goode estimates that nearly 2,000 people in Dougherty County have Alzheimer’s and that each has two direct caregivers.

The Alzheimer’s Outreach Center’s goal is to serve all impacted by dementia and Alzheimer’s – the patient, the caregiver, and the community. The center offers a monthly support group for caregivers and family members, Dementia Friendly trainings for businesses, and an annual dementia conference.

It’s important for churches to lead the way in helping meet these needs, Goode said. If a congregation has 100 or more members, at least three people will have Alzheimer’s, dementia, or someone who is a caregiver, she estimates.

“The church is where you need to go for help,” she said. “I think that’s why we exist. Offering something like this and recognizing there are people within the church who are hurting and who are in need and may even be embarrassed … we need to meet the needs.”

“It’s a beautiful, longstanding ministry,” he said. “I think it’s vitally important in the community.”

For Greene, it’s personal. The Margaret Jo Hogg Alzheimer’s Outreach Center stands as a testament to her friendship with Hogg, Hogg’s love for others, and God’s love for all.

“This is a gift from God. It’s a blessing,” said Greene of the center. “It’s a wonderful ministry of our church, and I hope it will become a model for others.”

Stay in the know